More and more, the content will be dominated by events of our new project, "El Dorado" for short. While the future is always uncertain, I again aim to tell it like it happens -the good, the bad, and the ugly, and that is what follows.

Rio Oro: Several parties have lost interest because??? one because he likes flat land to build cookie cutter low end apartments; several because they haven't made the commitment to move from their current area of focus... eg. Tres Rios, Heredia, to the Santa Ana area, several because the timing is wrong or it's too large, or too small, etc. Having said that we are still involved in three conversations and have received a proposal from one group to do an in depth feasibility study at their expense on exactly what we have proposed. We are continuing conversations with two other parties. We'll see.

Sales: We've had three separate parties looking to purchase as well as 10 people in Chris Howard's group. Several older couples, one with mobility problems -- both parties need a single floor unit with close car access. We fit the bill but perhaps not their price point. 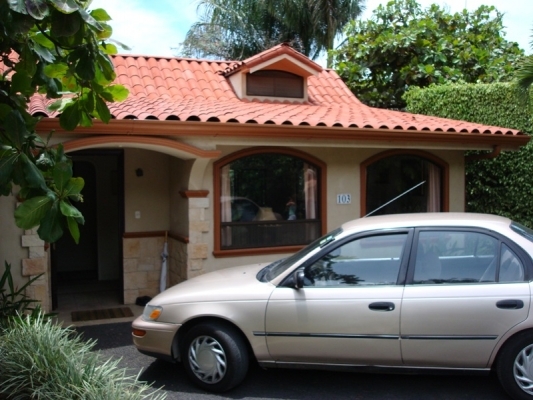 This is a fully furnished 2-bedroom unit situated in a 2-story building, which has two nits on the ground floor and two units on the 2nd. floor. Each unit is the same size 1,250sf) divided into 800 sf of interior space and 450 sf of covered front and back erraces. Floor. The solid masonry demising wall (common wall) as well as the 5" oncrete slab prevent sound transference.

This 1,345 sf single floor home includes a 200 sf private terrace plus parking for one car. It is attached on two sides by a 6” solid concrete block wall which prevents sound transfer. This is an extremely well decorated home with lots of natural wood built ins.

This 662 sf, + parking for one car and 33sf locker is a one bedroom home on the 2nd floor overlooking the large pool. It is ideal for a single person or couple —or investment property.

WEATHER: beautiful... windy which is normal and dust from construction next door... both are normal this time of year but the temperature has been perfect (at least for us).

Guests: Our guests have both returned to Canada, teeth fixed and relaxed. Our lives will return to normal until our next guest arrive March 1.

Misc. Notes: Kirebe to our east continues to build out. They are pouring the footings on their last four (?) buildings. Dust has been flying but should taper off soon.

MISC Notes: A new commercial construciton site has opened just south of the Mas x Menos in Santa Ana. The AyA water project has stalled in front of the church and continues to be unfinished, unpaved and the restaurants are not happy... personally, I think it is partly because there seems to be a lack of asphalt available. The AyA control station in Santa Ana remains in a state of delayed construction. Santa Ana continues to install curbs along main streets which currently don't have them. On Tuesday night around 9pm. the power went off and later I read that the surge which started by ICE went all the way to Nicaragua and knock out their power for a long time. I know I had to replace the compressor motor on my refrigerator (this is the third motor in 4 years)... and I have a surge protector dedicated to the frig...if the failure was caused by the surge, the protector didn't do the job I wanted... so a hassle and $230 later I'm back where I started from... fortunately I had another frig which was available so didn't loose any food... although now I have to negotiate back the turkey and trout I farmed out to friends... My birthday saw me cooking for a group and the lively conversation went way past all our bedtimes but it was one of those conversations we'll remember but not the content... after the Cognac we were just lucky to remember where we lived...

The following article was found in INSIDE COSTA RICA by one of their contributing editors. It offers his insight and observations:

Is Costa Rica Really A Social Democracy Or A Rightest Oligarch?
By John R. Holtz

Contemporary Costa Rica is anything but a liberal, socialistic country except for the pieces of bread tossed to the lower rungs on the people ladder. Socio-economic decisions are made behind closed doors and at the top. Way too often they are arbitrary, contradicting, and they almost never benefit the whole, but rather the intellectual right wing elite that have profited as well as dominated this country´s politics for so many, many years.

However, despite it all, the nation still survives and in some ways actually grows.

Effecting change, required or not, is one of our national sports along with football, politics and corruption. Our “change” is usually absent of direction, common sense and frequently self serving. The good news is that these poorly thought out edicts cannot always be implemented.

If conservatives want to intellectualize and complete their emotional journey while waiting for the next coming of Milt Friedman or Ronald Reagan, this is not the place for you. The inept bureaucracy lives, and will live. It has 64 years of life so why expect something different although it just might come back and bite the conservative leadership in the not too distant future.

The decision makers are well educated, well traveled, wealthy by any standard. They, in fact, created the dreaded bureaucracy as a fire wall to guard against popular retribution and upheaval.

Designed by former president, don Pepe Figueres to assure psychological income for the worker bees of Costa Rica, seeing a good thing, bureaucracy self multiplied like an amoeba. The Frankenstein monster now threatens our national well being with etched in bronze stagnation. “Change” does not always translate to accomplishment.

Since more bureaucrats, institutions and autonomous institutions simply slow progress down to a crawl, the illegal but socially acceptable bribe or personal favor moves things right along. There is almost no institution, semi-private or public, which has not been bought ranging from the drivers license lady who sold forgeries on the side to our presidents who sold out for almost a million dollars each.

However, for most life is standing in lines, filling out forms, coming under scrutiny from one, two or three organizations over the same issue, having to hire only approved experts, a batch of expensive lawyers, etc. all rolled into a single, frustrating basket of life in paradise.

Costa Rica is one complicated place to accomplish much of anything even if the task might very well be altruistic in nature like in building a school, a fire house, teaching a language, to name but three.

Making this milieu even less palatable is that the head or top guns of these bureaus are exonerated for their own misdeeds. Nothing new about this at all. Even icon and father of institutionalism, don Pepe Figueres got caught with his hand in the cookie jar and replied, with a crooked little smile, “…I wanted to buy some candies from the store.” On the spot, the country forgave him for stealing.

“The Lord giveth and the Lord taketh,” should be our national mantra. A deal is not a deal if another member of the elite club says it is not, be it one, two or ten years later.

The classic is a segment within the proposed tax plan that calls for taxing those companies who are located in tax free zones. Then there is the Crucitas Mine concession.

Good or bad, one president issued a decree for the green light while another, Lady Laura, decided not to honor that decree. A ten year signed deal to explore for oil and gas was also arbitrarily yanked off the table. Remember the promise of big money for the government and finally an “honest” enforcement of speeding laws through stationary cameras? Not so, they are in mothballs along with the agreement to purchase hundreds from a Brazilian company.

Costa Rica is a two tier country, not so much on income as in social division.

The big dogs have trained the general public to keep looking at salamanders while the hawk soars over head seeking more valuable prey down below. Leaders have seemingly unlimited powers to make or break contracts and under the table deals with impunity. (Has it occurred to anyone why casinos and sportsbooks pay no taxes? Could something be amiss here?)

Politics trumps wealth, but wealth is political. Then there are those who blindly conform to the whims of the elite accepting whatever is handed down. This is true and will remain so long as the common man of Costa Rica retains his sense of self esteem, that sense of making a difference, the sense of pride while living here among the forests, fauna and wildlife. When nationalism is gone, or when the sense of personal value is extinguished we will then and only then realize meaningful change and it might not be pretty.

Costa Ricans were not born corrupt, but they learned the trade and it has paid off in solid rewards. Some expats have also learned the rules of the crooked road and very much enjoy the fruits of an impotent judicial system as well as on-the-take law enforcement.

In the mean time, expats who yearn for sanity and stability need to take some Valium because it is impossible to fight the bureaucracy and you are shunned by the decision making inner circle. Costa Rica is what it is and to survive reasonably happy, you must bend like a willow in the wind, be a good reactionary, and most of all live with cultural contradiction.

*John Holtz can be reached at jrh@modernmanagement.org