When I started Residencias Los Jardines, I started writing a weekly news letter —determined to tell all the good, bad, and the ugly. I knew some readers would be interested in the construction process. I expected others might be interested in the lifestyle of two people who had decided to live outside the box. For others, the adventures of Lita, the parrot and the cat took on an entertainment saga all its own.

YOU CAN ALSO VIEW THE COMPLETE VERSION ONLINE AT:

Rio Oro: Paul and I are scheduled for site research on Monday with Jan... we will be on to a number of developments which have built out and which have had sales over the past year. This will help Paul catch up and us to developed a common base from which to plan.

Market Comment: a number of people lookin to buy and to rent but no one makin a commitment.

Garden Remake: Over the last 18 months or so, the canopy of a number of our trees has become so thick that it is blockin the light to allow the plants / grass underneath to grow. While we have cut some of the canopy back, we have decided to re-plant areas with shade loving plants. There are lots. The transition has started but it will be several weeks before it is completed.

Annual Shareholders Meeting: Is tentatively schedule for Saturday, Dec. 11. I'm readying material for that meeting and will be sending it out over this next week. I've reviewed the year end financial statement and have vetted it with the bookkeeper. A couple changes were required to make it more accurately reflect the past year.

See Descriptions and photos below.

This is a fully furnished 2-bedroom unit situated in a 2-story building, which has two units on the ground floor and two units on the 2nd. floor. Each unit is the same size (1,250sf) divided into 800 sf of interior space and 450 sf of covered front and back terraces. UnitS 106 A and B are on the ground floor; Units 106 C and D are on the 2nd. Floor. The solid masonry demising wall (common wall) as well as the 5” concrete slab prevent sound transference. 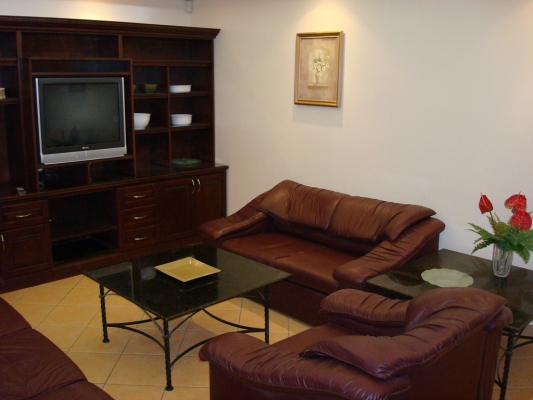 
Total Area (Sq Ft): 1250
Total area (Sq M): 120
Bedrooms: 2
Bathrooms: 2
Floor(s): Ground Floor
Type: Apartment
Furnished: Yes
This is a fully furnished 2-bedroom unit situated in a 2-story building, which has two units on the ground floor and two units on the 2nd. floor. Each unit is the same size (1,250sf) divided into 800 sf of interior space and 450 sf of covered front and back terraces. Units 106 A and B are on the ground floor; Units 106 C and D are on the 2nd. Floor. The solid masonry demising wall (common wall) as well as the 5" concrete slab prevent sound transference.

October 30, 2010
Government Considering Taxing Foreign Capital to Costa Rica
The government of Costa Rica is discussing the possibility of temporarily taxing foreign capital coming into the country in order to discourage the inflow of US dollars to the Costa Rican economy, which would help raise the value of the US currently.

October 29, 2010
18 Month Wait For Breast Cancer Surgery At Costa Rica State Hospitals
A report by the Universidad Nacional (UNA) "Proceso social del cáncer de mama en Costa Rica" reveals that it takes 18 months from the time a woman detects a lump in her breast to surgery, reducing the possibility of surviving breast cancer, the most common and deadly of cancers among women.

October 29, 2010
Costa Rica's RACSA Accuses AMNET Of Dirty Play
The Radiográfica Costarricense says that AMNET is playing dirty, taking down the state telecom down to its customers, claiming to have better internet connection and service.

October 27, 2010
Costa Rica Most Prosperous In Latin America
Costa Rica was ranked highest of all countries in Latin America in the 2009 Legatum Prosperity Index, ahead of Panama, Brazil, Argentina and Colombia.

October 26, 2010
Ruta 32, The Most Dangerous Road In Costa Rica
The eyes and ears of Costa Ricans have been on the problems of the San José - Caldera that has contributed to crippling access between the Pacific coast and the Central Valley, as the heavy rains of the season caused the shutting down of the highway between Orotina and Atenas for more than three weeks.

October 26, 2010
Costa Rica Recognized For Biodiversity Protection
Costa Rica has been named as the winner of the 2010 Future Policy award at a global summit on biodiversity in Nagoya, Japan, as the country aims to be the first developing nation to meet UN biodiversity commitments.

October 25, 2010
Costa Rica: $10 Billion Dollars Needed To Repair Roads
If it all started today, it would require us$10 billion (not million) dollars to repair roads, bridges and government buildings according to MOPT and the Contraloria. Where is that money going to come from? Put that on top of everything else that is considered “crisis level” (real, or perceived) and again a fine mess.

October 25, 2010
Costa Rica's Pavas Airport Soon To Be A "Relajo" No More
It is a common practice in Costa Rica to close the barn door after the storm

Weather: We are at the end of what is supposed to be the wettest month. This year, it has been dryer than in the past 5 years, including last year which was the driest year in 60 years. We are back to irrigating a full month before normal. This is still a "transitional" month weather wise but based on the past month, there isn't likely to be a lot of rain until next May....

Residency: As expected; we went as instructed only to be told to return at the end of November. Our attendance at Migration is not advancing our application. We are wasting out time and the lawyer confirms this.... I had to try to feel I was doing something..... In effect, I am only frustrating myself and wasting our time.

I've worn out my computer's keyboard. I have one letter which is not being reconized and a number of others which oftentimes do not work the first time. I'm ordering a new keyboard. Until then, correspondence will be frustrating ..I've had to ask Jan to fix up my missing letter...


For inquiries about availability of residences at Hacienda El Dorado or Residencias Los Jardines, contact: