No sales--Buyers are few and far between and all projects that we're aware of.

Water: It seems that the AyA letter saying they would give us a 4" water service and it would be metered at that point may not be acceptable to INVU--the condo granting review board.  These two organizations don't  sing from the same song book--surprise, surprise.  We are attempting to  resolve the concerns or differences and get the wording right.

Principal Consultant:  IF we were cynical we might believe the principal consultant is purposely delaying the completion of the permitting process such that he can keep the monthly payment rolling in.  We are having a meeting with him on Monday.  We're frustrated, very frustrated.  He seems to be incommunicado for us much of the time and so many things are delayed for a week or more...  It's difficult to change horses in mid stream.  We have a meeting set with him for Monday.

Discouraging Event: We had a tenant leave without notice--he bought a house.  He had contracted for a year and within two months left without notice.  We knew he was buying a house but we didn't know when he would be leaving.  We're keeping his deposits but it wasn't an act which endeared me to him.

Vandalism:  The first in 5 years occurred the other night.  Some one wantonly ripped off the intercom near one of the gates.  It is probably not useful for anyone else;  we'll have to have it replaced and weld a guard over it.

Rainwater Drainage: We got a chance to test out the drainage system this week.  The gardeners found out that they had not cleaned or cleared some of the areas that they so vehemently claimed to have fixed.  We had to replace a couple pumps for reasons which are not clear to me.  At time of writing, all systems seem to be working as they should.

This single story home (1506 sf. + parking for one car) is detached, has two bedrooms, two bathrooms, home office, living room wall / entertainment center along with a built in office and a semi-private terrace. In addition, it has a vaulted ceiling in the “great” room and two skylights. The covered entrance way is suitable for two chairs located next to a covered garden area. Once through the impressive front door, you enter the “great room” which houses the kitchen, dining room, office and living room. Upon entering, there is a built in wooden hutch surfaced with granite—it matches all the built-in furniture in the great room. There is a clothes washer and dryer off the 2nd bedroom. It may also be used for storage.

Total Area (Sq Ft): 662
Total area (Sq M): 61
Bedrooms: 1
Bathrooms:1
Floor(s): 2nd Floor
Type: Semi-Detached
Furnished: Yes
This 662 sf, + covered parking for one car, is a one bedroom home on the 2nd floor overlooking the large pool. It is ideal for a single person or couple. 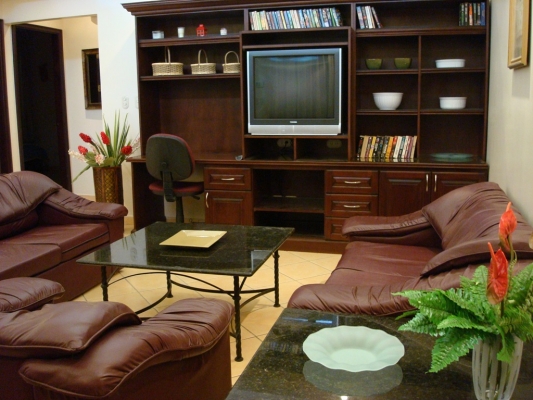 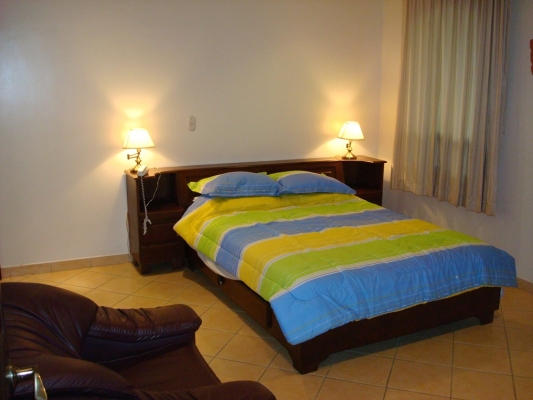 May 10, 2009
Costa Rica rainy season dries up business
(The Tico Times) Germán Viales grumbled something under his breath Tuesday afternoon as thunder warned him of the rain that would soon dampen his table of lottery tickets if he didn't move.

May 10, 2009
US Bans Shrimp From Costa Rica To Protect Sea Turtles
(Inside Costa Rica) The US Department of State's Bureau of Oceans, Environment, and Science imposed a trade embargo on all Costa Rican shrimp exports to the US, effective as of May 1. The embargo is due to Costa Rica’s failure to enforce its laws that require commercial shrimp fishers to protect sea turtles from capture and death in trawl nets by using Turtle Excluder Devices (TEDs).

May 10, 2009
Flu virus surfaces in Costa Rica with no identified ties to Mexico
(The Tico Times) Two more likely cases of the Influenza A (H1N1) virus have been identified in Costa Rica, bringing the total probable cases to four.

Weather: The rainy season started last Sunday.  We've had showers five of the past 7 days.  No more dust and the plants are becoming happier.

Tough Times:  I happened on a former employee of ours.  He's a good tradesman and a nice man.  He was looking for work at Kirebe next door.  He has been out of work for three weeks now, can't pay his rent and doesn't have much food.  My heart went out to him.  Fortunately I was able to give him a phone number of someone who may be hiring.

An Act of Kindness: We had made arrangements to go to a nice Italian restaurant on Saturday with another couple on site. We knew this place was a bit of a dressy place for CR.  An hour before we were to leave Erika and her sister Maria came over with makeup kit in hand. They had realized that Lita could no longer apply makeup because of her eyesight--in fact it's been about a year now that she has not used eye shadow, eye liner, and all those things women use--lipstick was all she was able to manage.  She was so happy that she could now look like the others.  When I thought about what they had done for her and how they had made her feel, it brought tears to my eyes.  Those acts come from the heart; not the pocket book.

New Highway:  The autopista between Santa Ana and San Jose is now virtually done.  It lacks only light standards and median landscaping.  We drove it last night.  Wow!!!!  what a beautiful road--smooth with a substantial asphalt base which should last, lines and reflectors, guard rails, pull outs for the buses (now to get them to use them), overpasses for pedestrians, merge and exit lanes, etc.  This definitely sets a new standard for CR and rivals anything in N. Am.

A Blast at the Time Out Tavern:  This was suppose to go into last week's letter but it got missed.  Most people who are interested  probably know by now that around 2pm last Saturday, an explosion outside the Time Out caused extensive damage to their kitchen and the rest of the building.  No one was hurt.  They say they will rebuild;  my guess is that it'll be at least a  month before they are back in business.  We were there Friday night for a great meal.  Now we are going to Keante's in Belen--a good Tico restaurant with reasonably priced food, good service.  Lita and I each have our favorites.

For inquiries about availability of residences at Hacienda El Dorado or Residencias Los Jardines, contact: